With Hammer and Brush 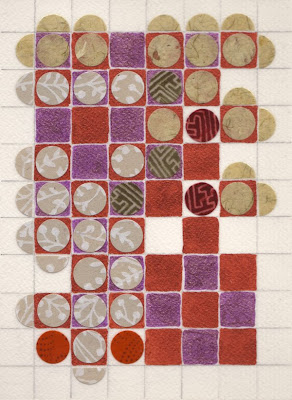 I have just made what I think is my second (my first was the use of acrylic medium as adhesive) most important collage discovery: the arch punch. I've had one for something like 15 years sitting in the second drawer of the metal filing cabinet in the kitchen. I even have the wooden mallet to strike it with and the black pad to cut on.

Yesterday I suddenly got a mental picture of using it to cut circles for collage and to my amazement I actually could locate all three things. The cats hate the noise so the process keeps them away from my work area in addition to making perfect circles so much faster and more perfectly shaped that I have heretofore done with scissors. A miracle on all counts!

Pictured above is Hammerdots No. 2. It has 5/8-inch fabric and paper dots on a grid painted with metallic acrylic. 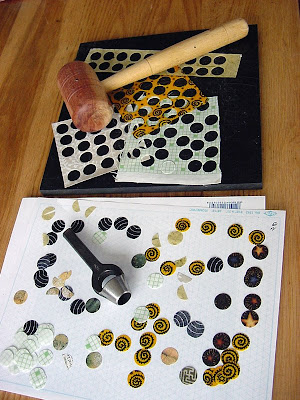 I was excited to see the article: "Moments of Illumination: P. Adams Sitney on the Films of Lawrence Jordan" in the April 2009 issue of Artforum. I wrote about Jordan twice last December (Larry Jordan's Collage Animation and Spoiled by Technology?).

Jordan, (b. 1934) has just completed his longest film, a twelve-hour "visual autobiography" titled Circus Savage. His earlier work can be seen on a four-disc collection published by Facets Multimedia called The Lawrence Jordan Album.

Jordan worked with the poet Robert Duncan in 1955, and Duncan's partner, the collage artist Jess, introduced Jordan to the collage novels of Max Ernst. The style was an important influence that contributed to the development of Jordan's cutout animation.

Sitney cites this Smithsonian Institution Archives of American Art Oral History Interview with Larry Jordan . He is author of the book Eyes Upside Down: Visionary Filmmakers and the Heritage of Emerson (NY: Oxford U. Press, 2008).
No comments:

Today I'm reaching one of my blogging milestones: my centennial post. So far I haven't deleted one. Nor have I significantly revised any post except to edit out unnecessary words or play with the indexing.

I'd love to do a bibliographic subject blog with title as subject and an index card/page with unlimited space. The background would be slightly tanned and foxed. There would be a punch hole bottom center. . . sort of a steampunk version of the online card catalog.

That reminds me, I saw a great animated short film directed by Anthony Lucas called "The Mysterious Geographic Explorations of Jasper Morello" on The 2005 Academy Award Short Films Collection. It's done in a visually rich kind of shadow theatre with steam-powered airships, lots of gears, gauges and pulleys amidst people in profile. The city of Gothia is being "ravished by a sickness of appalling virulence" as the ship and its crew take off into a sky that looks like foxed paper. A biologist onboard is studying the airmen to determine if the quality of elevation might lead to a cure.

The genre of the film is something called "steampunk" which I had never heard of. There are steampunk novels such as James P. Baylock's Lord Kelvin's Machine and Keith Laumer's Worlds of the Imperium (1962). Do you remember the televison show "The Wild Wild West"? Well, according to what I have read, that is an example of steampunk. . . cool mechanical inventions in a Victorian setting. I'm thinking that Edward Gorey is sort of steampunkish, too.

The silhouette animation style is credited to Lottie Reiniger who wrote a book titled Shadow Theatres and Shadow Films (reprinted 1970). A similar short film by Steffan Schaffler is The Periwig-Maker (1999). Both are beautiful and disturbing!
No comments: 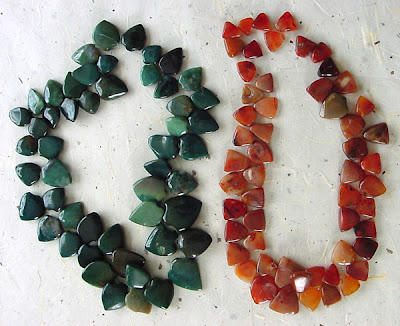 I have two strands of stone "hearts" or "leaves" from Nigeria. 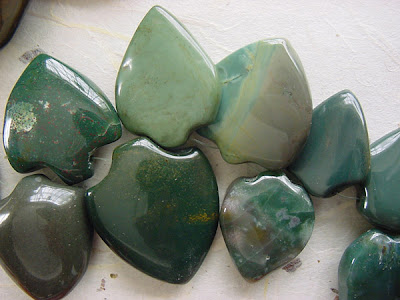 Here's a detail of the bloodstone strand (above). Luscious green with the interesting color variation that only genuine stone can provide. 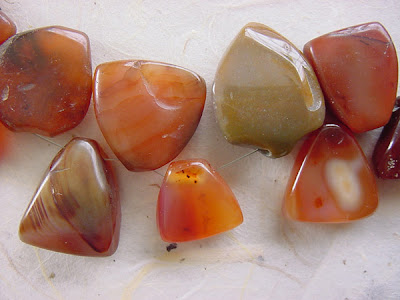 And here's a detail of the nice orange-reds of the carnelian strand (above).
1 comment:

Back in the '70's when I was working my way through college I had a job at a public library that subscribed to all of the art magazines. One I used to read there was Artforum. My first real look at the magazine in over 30 years was the March 2009 issue. I love the square (10.5x10.5 inch) format but more that that I love the coverage that was awarded the subject of mixed-media collage!

The first thing that caught my eye was an advertisement for Elliott Hundley's show running March 7 - April 4, 2009 at Regen Projects in Los Angeles. The ad illustration is fascinating, and so are "Some poured leaves over the dead girl"(image 6 of 12) and "Blinded" (image 8 of 12) which are two of the pieces on display. The underlying thread of this exhibition is the Greek tragedy Hekabe, a play written by Euripides.

Another advertisement seduced me with its flat files (would rather have them than a new car!) to visit Galerie Marie-Puck Broodthaers . I really like the first piece by Paul Van Hoyedonck for its composition of dots and spheres!

And I'm glad I checked out The Art Shack of Mike Shine featured in "Inside/Outside: Artist Environments" (5 March -24 May, 2009) at San Francisco's Museum of Craft and Folk Art. Otherwise I would have missed seeing the cool winged devil with "wheel of fortune" menu device! And the flip-comic book "Flotsam." Creative minds will come away thinking that your house is nowhere near weird enough. . .mine still needs lots of work.

Back to L.A. for the "Nine Lives" exhibit of Visionary Artists running 8 March - 31 May, 2009 at the Hammer Museum. The magazine advertisement is illustrated by Llyn Foulkes's negative-utopian mixed media "The Lost Frontier."

Then, a great article titled "Cut and Paste: Charlie White on the Collage Impulse Today." The development of the medium as influened by such social phenomena as children's TV (Sesame Street and The Electric Company), the first commercial Internet connection in 1988, Photoshop in 1990, HTML in 1993 and the Nikon SLR camera in 1999.

And another great article on the decollage of Jacques Villegle . He is catagorized an Affichiste--descended from the Cubists and Dadaists (Schwitters, above all) in making art that was a form of collage, having to do with Surrealist automatism, chance and anonymous collaboration. Villegle's work makes me want to lock up all my scissors to force myself to explore torn papers in all their random beauty.
No comments:

Email ThisBlogThis!Share to TwitterShare to FacebookShare to Pinterest
Labels: Collage 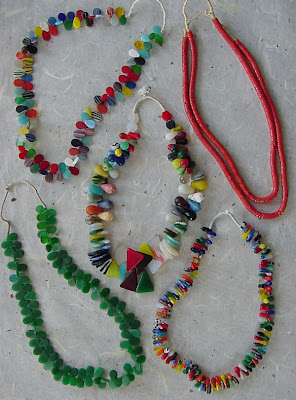 Here's a second parcel of collectable beads, this one of glass beads from the Czech Republic. The center strand is a colorful collection of old Czech "wedding" beads with some "claws" and triangles as the focal.

Come visit Anita's Beads to see more of this special collection of beads which will be on display through the month of April.
No comments: 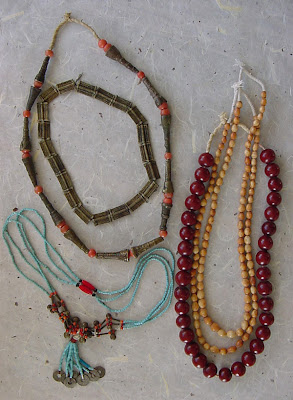 I just received a few parcels of antique trade beads from a friend who travels around the world in search of the rare and the unusual. The metal rectangles are Baoule folkcrafted brass beads from the Ivory Coast. The cone-shaped beads surrounding it are very rare antique brass funnels from North Nigeria.

Also from North Nigeria is a multi-stranded necklace of blue glass beads decorated with Colonial coins and old brass bells.

The strands to the right include two of graduated cow bone from Nigeria and a strand of Ethiopian "red amber" (which is actually very early German plastic).

These and other one-of-a-kind trade beads are on special display at Anita's Beads and will be available for purchase for a limited time (through the end of April).
No comments: 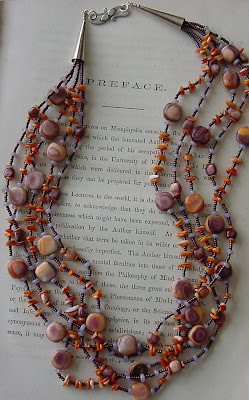 I was curious to see what I might learn about the spiny oyster and its use in jewelry in books I have at hand. Michael Bahti, in his book Spirit in the Stone: A Handbook of Southwest Indian Animal Carvings and Beliefs (1999) in his section on "Traditional Stones & Other Materials" has this to say:

Commonly known as spiny oyster shell, spondylus comes from the Pacific coast of Baja California and the northwest coast of South America. Until the Spanish introduced coral, it was highly prized for its orange to reddish orange to red colors because it was the only source for these shades. [p.150]

On page 122 of The Turquoise Trail; Native American Jewelry and Culture of the Southwest (Abrams, 1993) I found a nice photo of a carved spondylus frog effigy (symbol of rain) from the School of American Research Collection, Museum of New Mexico.

One of my favorite books on beads, Louis Sherr Dubin's The History of Beads; From 30,000 B.C. to the Present (Abrams, 1987) provides two outstanding illustrations of South American jewelry made from spondylus beads. Figure 264 features a necklace of blocky graduated beads from the south coast of Peru attributed to the Inca culture circa 1100 A.D. Figure 266 is an incredible bib necklace of predominantly orange spondylus disc beads edged with purple and white shell discs. Measuring 14 inches (43 cm) in width, the piece is from Chan Chan, the capital city of the Chimu in Peru. Dating between 1000-1470 A.D., it is now housed in the American Museum of Natural History in New York

And I can't forget to mention Robert K. Liu's "Spondylus in Precolumbian, Historic and Contemporary Southwest Jewelry" published in Ornament 28(3) Spring 2005. I've been a subscriber for many years.

There, now I can clear one pile off my desk! I'd like to get a look at Jewelry of the Prehistoric Southwest (1978) by E.W. Jernigan. To explore the topic from a more scientific viewpoint, someday I may find the time to examine all of the material that is available on the Biodiversity Heritage Library site. You can check out the amazing list of resources that result from a search there on spondylus. . . but I really have to stop.

Later I hope to put up some pictures of spiny oyster bead strands that are available at Anita's Beads in case you want to make your own multi-strand necklace like the one I made pictured above.
3 comments: 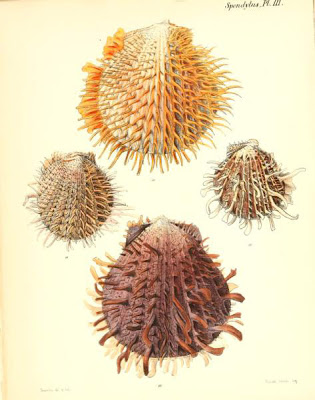 I've been lost for about a month in the Internet Archive. The Internet Archive, a 501(c) (3) non-profit, is building a digital library of cultural artifacts in digital form with free access to researchers, historians, scolars, and the general public.

To continue my spiny oyster discussion, I found a wonderful source there: Conchologia Iconica; or, Illustrations of the Shells of Molluscous Animals by Lowell Reeve (1814-1865). Nearly twenty volumes of the set published in 1856 can be viewed in the Internet Archive in full text. Volume nine contains the monograph on Spondylus, illustrated by eighteen color plates, which I have added to the Information Pages on AnitaBeads.com. They are all incredibly beautiful!
No comments: