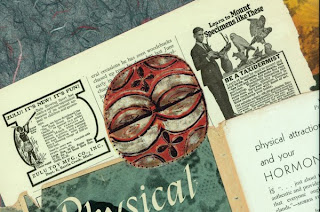 It is so rewarding when someone sees my work and shares a connection that I have overlooked. This past weekend a gentleman was studying the older collage work in my back gallery and came to me with a question about my diptych titled A Sad Infatuation.

He wanted to know if there was some significance to the name Morris Fishbein which appears attributing a reviewer's comment on the jacket flap of Physical Attraction and Your Hormones. I replied that I did not know anything about Fishbein, who also wrote the books forward, but would now have to look him up. And this is what I found. Adds a little bit of relevance to the overall theme I must admit! 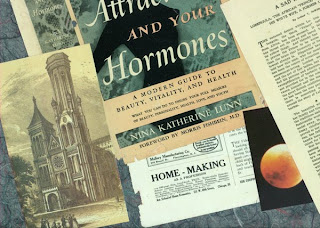 And there is another bit of trivia: The author of the book, Nina Katherine Lunn, was the daughter of Wallace H. White, Jr. White was a U.S. Senator from the state of Maine. Lunn reportedly "became a Washington (and later Hollywood) society figure, especially after writing a book entitled Physical Attraction and Your Hormones (Doubleday, 1950), and working on another, apparently unfinished, entitled Venus was an Amateur. She divorced her first husband, a Pittsburgh broker, in 1942 for having squandered her assets."