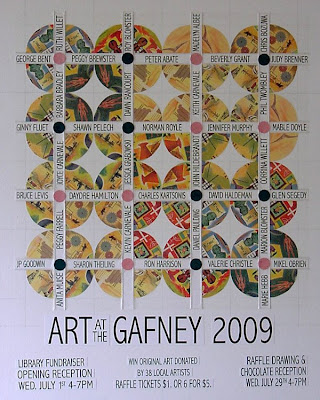 I have been making a poster for the art raffle fundraiser for the Gafney Library. My task was to create a design that would accommodate the names of the 38 artists who are donating work for the event. I'd planned to take photos to document every step, but as I got closer to finishing I couldn't break the momentum to stop and take pictures. I was under a little deadline pressure as well.

Working on a piece of 24x30 inch canvas board, I arranged 16 large circles (using a dvd as a template) to begin the design. I envisioned the names as radiating out from the center of the circles. There needed to be space for 38 names. I printed them out in Photoshop along with the text for the bottom of the poster. At first some names were displayed on the diagonal but I finally settled on a design where all the names were at right angles: 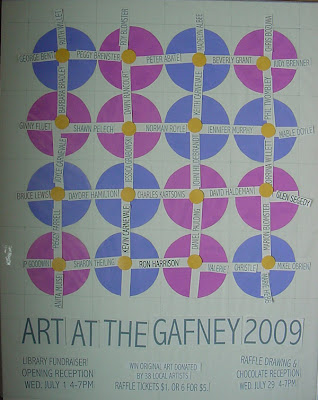 I had recently rescued a set of encyclopedias with the covers missing from the paper dumpster at the town dump. I was attracted to the lovely colors (lots of yummy yellow) of the endpapers and thought that recycled books would be appropriate for a library related event. I had seven front pages like this: 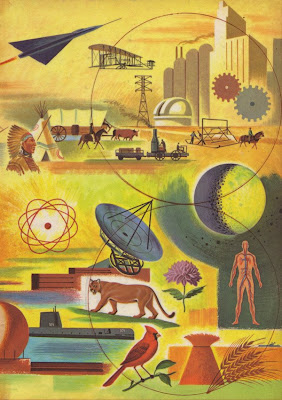 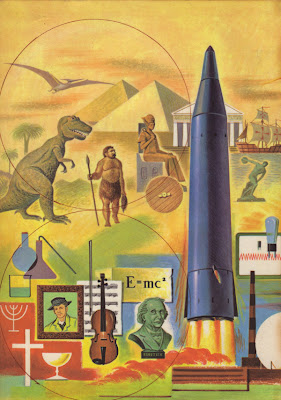 I traced my dots to include my favorite parts and was able to get two dots (each yielding four quarters) from each page. The part that took the most time was deciding on the arrangement of the quarters. When I finally got a satisfactory arrangement, I photographed the piece and looked at it on the computer screen from across the room to check the light and dark areas. The hardest part was deciding which quarter to place in the central position. Here's an early arrangement: 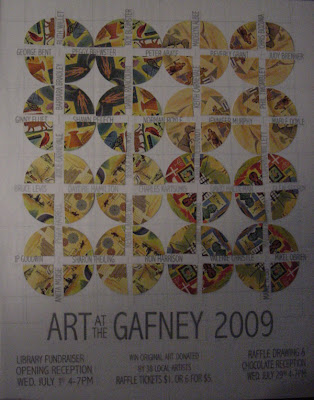 All of the words and the encyclopedia pages were coated on both sides with acrylic medium and trimmed: 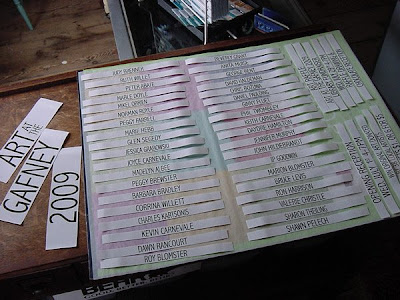 Then they were put in place on the canvas board which had previously received two coats of medium. I ironed the surface in one step to adhere the elements to the canvas board, using a large sheet of silicone paper to protect the surface from being marked by (and sticking to) the iron.

Then I used blue painter's tape to mask the outside edges of the main design and layed down some .5mm white cotton cord to delineate the boundry of the white space behind the names, taping down the ends of the cord on the painter's tape. I locked the cords into place by covering the square area of the design with a sheet of very thin Japanese white tissue. I applied acrylic medium with a small brush over the entire surface, being particularly careful of the area around the string. This made the top layer virtually disappear and allowed the colors underneath to show through. Then I trimmed the ends of the cord even with the thin tissue and removed the painter's tape.

My last design task was to make a decision about the small dots at the intersection of the names. After playing around with different versions in photoshop, I decided to use two contrasting colors in order to have alternating colors at the four corners to create some movement: 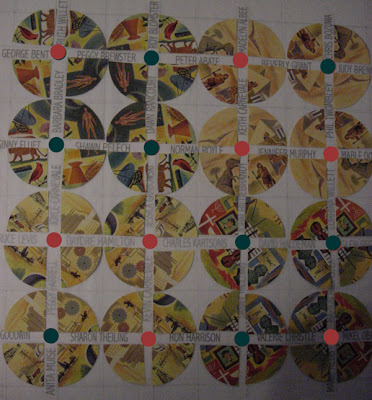 I selected dark blue and pink from my stash of colored endpapers (to comply with the recycled book theme). Dots were punched using an arch punch from coated paper, set in place, and adhered with an iron.

As a final step I applied two more coats of acrylic medium to the entire poster, allowing it to dry thoroughly between coats. The design reminds me of those Yo-Yo quilts where you gather circles of fabric and attach them at the edges.
2 comments:

The fireflies were amazing last night. The back yard, the marsh, and the trees on the opposite side were full of them. Every once an a while something would stir them up, deer walking around perhaps, and their flashing numbers would increase. I stood in the dark and watched them for about a half hour.

There were no fireflies where I used to live. I would see them occasionally at campgrounds but never like I see them here. It was magic the first time I saw them all over my yard, thirteen years ago, right after I moved in. Maybe it's all the rain we have been having that made their show so incredible last night!
2 comments:

I'm so happy that I got insight into the completion of one of my archived collages. The solution came to me just now as I am sitting here with my tea. It needs some flames at the bottom. . . more red! I'll probably paint the flames because I doubt that the right photo is at hand. Well, there is one but it is ear-marked for another project. Although I could use it as a reference for the painting.

Or maybe I can find an old engraving that I can scan, enlarge and hand-color. Something from Dante to evoke the flames of hell.
No comments:

Email ThisBlogThis!Share to TwitterShare to FacebookShare to Pinterest
Labels: Collage, Work In Progress

I was monitoring the chipmunk activity on the recently filled feeders behind Anita's Beads last evening. Whenever I notice the birds being outnumbered I call out the window: "Who's chippie's out there?" and they usually jump off. The newbies run for the hills, but the more seasoned ones come closer in anticipation of strawberries or some such treat.

Last night as I called out I noticed that one of the feeders I had filled not one hour earlier was already one third empty. And the one stubborn chipmunk still feeding on it refused to retreat, scattering seeds furiously every time I repeated the call. Somehow he had managed to squeeze himself into the feeder without removing the top but could not get himself out!

It would have made a great picture but I missed it. This photo of the feeder outside my studio window gives you an idea of the type I'm talking about. Picture it containing a chipmunk having a panic attack. 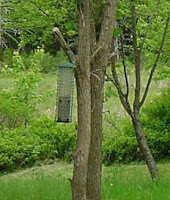 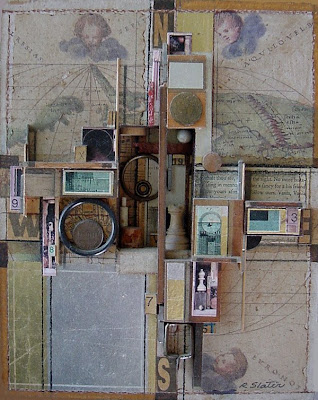 I've mentioned the influence of my first favorite collage artist, Roderick Slater, once before. I actually own one of his pieces now. It's hard to find images of his work anywhere. From what I understand, Slater leads a quiet unconnected life somewhere in Maine.

Jonathan Talbot (another collage hero of mine) has an image of Slater's collage called Mnemonic Device on his site. And once and a while I see one on eBay. Which leads me to the reason for this post.

An eBay seller called "slaterworks207" is offering Taste Contained by Roderick Slater. In the description mentioning artists influenced by Slater, he links to AnitaNH: Collage & Life!

Pictured above is "Landslide for Erin" by Roderick Slater, with more details below. 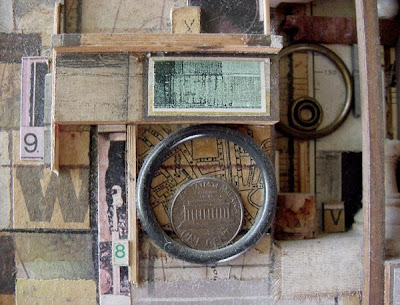 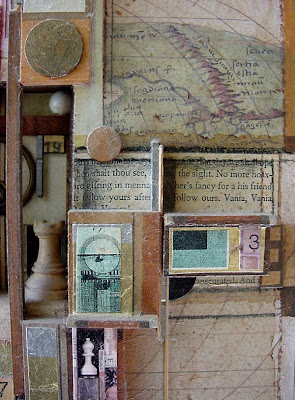