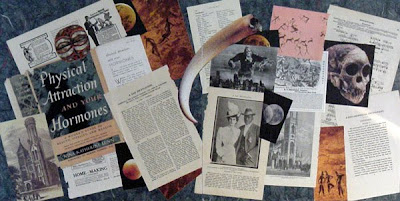 Cleaning out I found a folder with the back story materials for my collage, pictured above, titled A Sad Infatuation (Divorce Diptych No. 2). The work is on two panels of 16x16 inches each. I even wrote a little essay about it, back before I started blogging. So here it is, edited a little, and with illustrations added. The three pages of the original magazine article are larger images than I normally post so click on them to read them for yourself.


The Amazing Story Behind "A Sad Infatuation"

At one of my favorite Maine antique shops, I found a few issues of The New England Home Magazine ( A Weekly Supplement to the Boston Sunday Journal) dated from the years 1899 through 1901. I was immediately drawn to one particular article by Arthur T. McWilliams titled "A Sad Infatuation: Lobengula, the African 'Prince' and How He Tortures His White Wife, A Former London Belle." 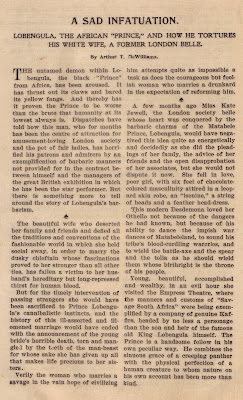 The photograph on the second page of a handsome young black man with a demure well-dressed white woman certainly caught my eye. 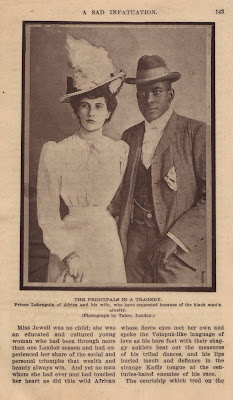 And then I read the story. . . unbelievable! Interracial Courtship and Cannibalism: shocking stuff even by today's standards in my neck of the country, and I was looking at the Sunday Supplement of a city newspaper published over 100 years ago. I wondered how my grandmother Blanche's mother, my great-grandmother Clothilde, might have reacted to such a sad tale. It is altogether possible that she could have read this very same article in her Salem, Massachusetts parlor some Sunday afternoon a century ago. 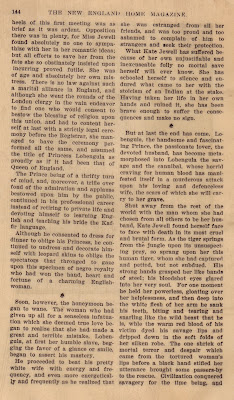 I decided to do a collage on the story since I was, at that time, involved in the whole "dysfunctional marriage" theme. (See: this example.) If I could tell my story, then why not illustrate someone else's? The clincher was finding a book called Physical Attraction and Your Hormones at the dump. It explained the reason for the sad infatuation - hers, mine, and a million others. Our Hormones Are At Fault! Simple as that. 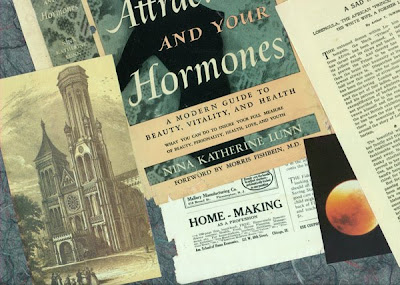 Elements for advancing the story made themselves known. The little magazine advertisements reflected the times: "Homemaking as a Profession," and one for a dart game: "Zulu! It's New! It's Fun!" Another proclaiming: "Be a Taxidermist! Learn to Mount Specimens Like These!" provided perfect innuendo. 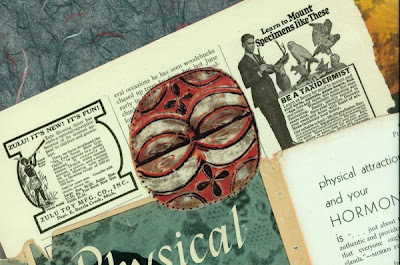 An Esperanto Dictionary, and a chapter on cannibals from an old Philosophical Dictionary (both from the dump) heightened the story even further. The primitive figures on pink and orange backgrounds provided just the right touch of color, while the skull and tusk really drove the theme home! The church represents matrimony and has, coincidentally, been designed by a man named Savage. 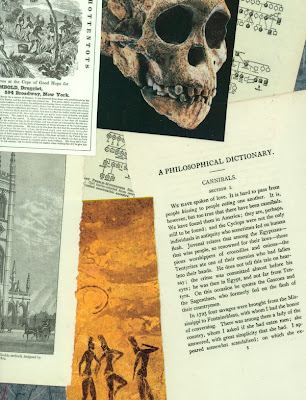 The chart from an old encyclopedia illustrates, in black and white, the evolution of "Feeblemindedness" and serves as a reminder of the scientific misconceptions regarding interracial mating. The classic movie still of King Kong carrying off Fay Wray was a given. Just to make sure those sex-drive hormones rage at optimum level, I threw in some full moons to weaken self-control even further. 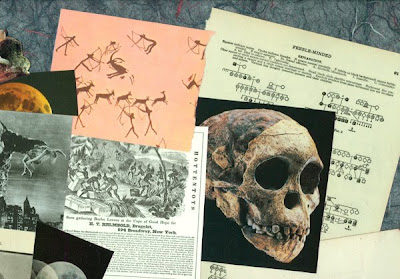 Of course I considered the thought that the story might be made up and the photograph staged similar to today's National Enquirer. So I went online and Googled names. In Time Magazine dated 10 January 1944 I found an article titled The Skull of Lobengula. King Lobengula of the Matabele is described as 'a bull elephant of a man, 6 ft. 2, and burdened with 200 wives.' Wikipedia has a listing for Lobengula Kumalo (1845-1894) however he was deceased some six years before "A Sad Infatuation" was written.

I hit pay dirt when I discovered Ben Shephard's book Kitty & the Prince published in 2003. A bookseller's description reads:


In 1899, a South African showman called Frank Fillis chartered a liner and filled it with two hundred Africans, assorted whites, countless animals and a man who claimed to be the son of the Matabele King, Lobengula. Then he brought all these ingredients together at Earl's Court in London, in a show called Savage South Africa, which combined re-enactments of the Matabele Wars of the 1890s and a "Kaffir Kraal," where the British public could wander among Africans in their natural settings. At first all went well. But then the star of the show, Prince Lobengula, caused a scandal by trying to marry a pretty, respectable, white girl, Kitty Jewell - the daughter of a Cornish mine engineer, whom he had met in South Africa. The Daily Mail raised an outcry against the behavior of women visitors to the show who were "weakening the Empire" by being over familiar with the semi-naked Africans. This is the story of the doomed love affair between Kitty Jewell and Peter Lobengula. It is at once a heart-breaking love story, a historical mystery, and a window into popular racism, popular journalism, and feminism in the 1890s.

So Ben Shephard is the man with the answers and I can't wait to get my hands on his book. I should confess, in closing, that the last page of my copy of the original article is missing! Even with my flawless new studio organization I still can't locate it. Worse than that, I forget how the story ends. So I invite you to "Choose Your Own Adventure" just like in the children's book series, and post your own version of the ending in the comments section.

Just one more thing. There is mention in "A Sad Infatuation" of a language called Volapuk. Intended to be a universal language, it was invented and first published in 1879 by Johann Martin Schleyer, a German priest. Volapuk was in vogue at the end of the 19th century but its popularity was later eclipsed by Esperanto.

Note: An update on "A Sad Infatuation" can be found here.

Concerning your mention of Esperanto.

Please check this language at http://www.lernu.net or http://eurotalk.com/en/store/learn/esperanto

Hi Brian, thanks for the links!