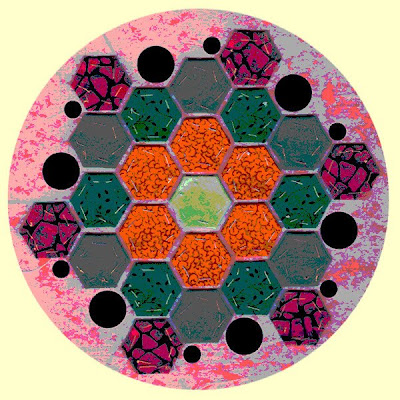 Back in the early 90's I got off onto a serious "Grandmother's Flower Garden" quilt tangent. Patterns are created from interlocking hexagons. The trick is to baste fabric over precisely cut paper templates so all the angles meet exactly when the pieces are assembled by hand. I would run off sheets of hexagon shapes (outlined in thin black marker) on a xerox machine and spend hours cutting them out. Then I would baste fabric pieces over them. I became totally addicted to the process, spending hours in the evenings after work. I had a little tin of paper and fabric hexagons that I carried in my purse so I could baste on the train, while being driven in the car, while camping, and even once while killing time on jury duty. 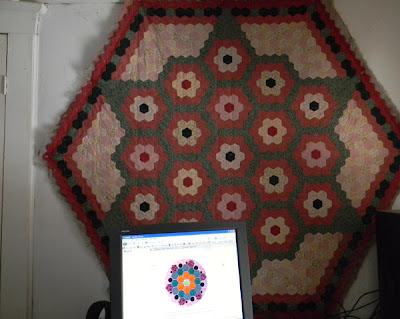 My first quilt was hexagon shaped. It hangs on the wall behind my computer--unfinished. 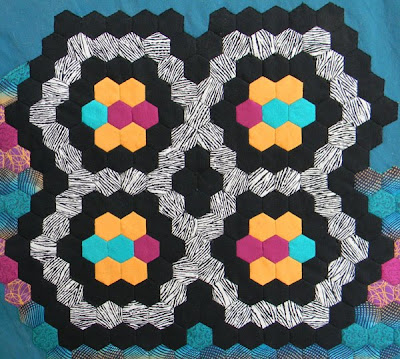 Above is another quilt (also unfinished) I called "Communicating With Extraterrestrials." I used little beads in place of traditional quilting or tying. 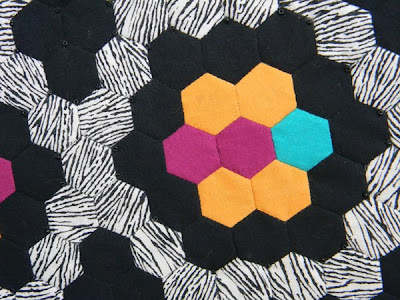 My most ambitious quilt, an experiment in color shifting, was an excuse to collect cotton fabric in as many solid colors and small prints that I could find! 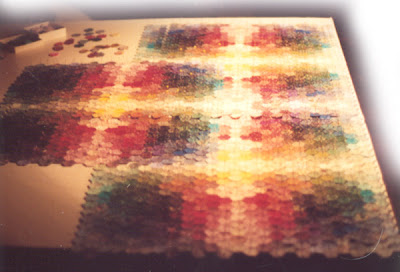 I constructed hundreds of hexagons and pinned them to a huge piece of foam board which took over the kitchen table and provided endless amusement for cats. The piece was disassembled when I moved to New Hampshire and exists only as a photograph. 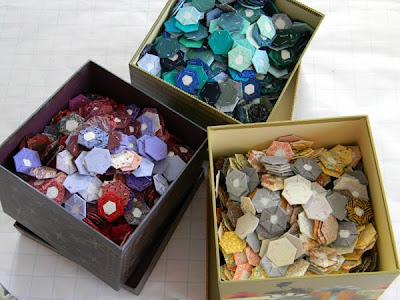 Recently I spent some time sorting the pieces after 15 years and made a little test piece to see how I liked them collaged with space between the units. So far I am underwhelmed, although I do rather like the photoshop manipulated version at the top of this post. 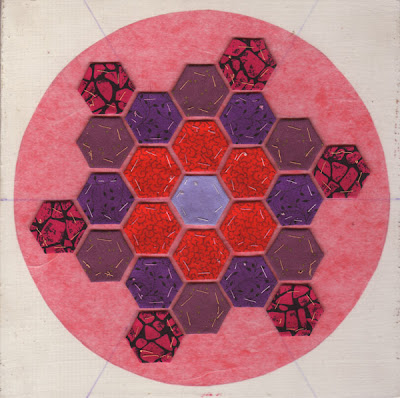 My wife just purchased an ironing board cover that has 1" squares, triangles, diamonds and circles printed on it. It looks to me like it was made for quilters, but she just wanted it because it was sturdy and well made. She has made and still does make receiving blankets for infants out of scrap flannel from my daughter's baby clothes business. Me, all I want is to be able to use the sewing machine to make my own perforated stamps. And it doesn't need any thread in it to be of use to me.

I intend to try that perforation technique some time. You can alter the distance between them by adjusting the stitch length. I've always thought that the hardest thing about using a sewing machine is learning how to thread it properly so it's nice to have a use for one that does not require thread or a bobbin!

Speaking of grandparents - You ought to check out Susan E's story at This Old Paper. http://thisoldpaper.com/straight-line-optic-zone/