Sneaking Up On Perfect

I've been in a funny sort of restless mood which I have learned to recognize as a need to immerse myself in art again. For the past five days or so I have been working on my Toad Hollow Minerals site and I've made pretty good progress there but my productivity has been dropping off which is a sign that I need to switch to another activity. Today is Monday so I am approaching my "weekend" as Anita's Beads is closed on Tuesdays and Wednesdays. I have a big table in the middle of the room which, right now, is covered with trays of beads. This evening, when the little hand hits 5 I will clear off the trays and start making a collage mess. I have my previously mentioned dedications to Neil Welliver and Lenny Bruce, in addition to assorted gems in the Archive of Indecision. Plus I have in mind a new series called Clothilde's Alphabet which will make use of some pages from that lovely French dictionary I recently found. And then there is the painting. I need to ease myself back into that as well.

I call the process "sneaking up on perfect." I turn the ringer off on the phone, put some Leonard Cohen on the CD player and start moving materials around, pretending that I am straightening up so that I don't scare myself into thinking I'm actually involving myself in the process of creating something important! Here are some works in progress: 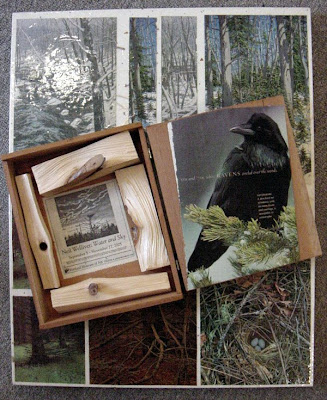 The one above will be called: When Ravens Circled Over the Woods (For Neil). This next one below has been sitting around for ages. I keep changing the size of the board. This is the tightly cropped version but I'm thinking that the reason why I can't finish is because it needs a border of some sort. The four colored "stars" are test squares that I did in batik back in 1980. 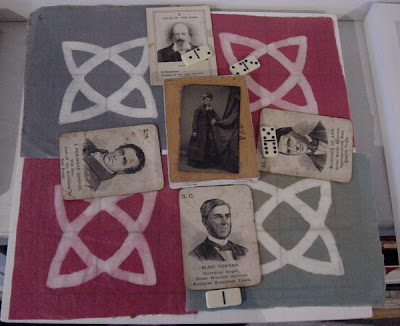 And below is another one from the depths of the Archive of Indecision. I've lost my train of thought on this one! There are too many images here for one piece so I need to edit them down or maybe start thinking of this one in terms of a series. 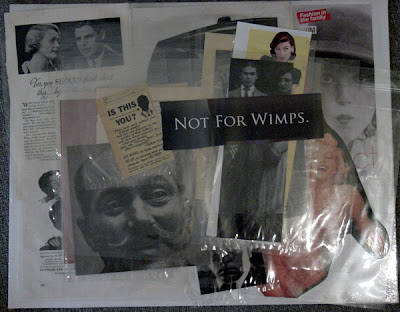 Email ThisBlogThis!Share to TwitterShare to FacebookShare to Pinterest
Labels: All My Favorites 2008, Batik, Work In Progress

pretending that I am straightening up so that I don't scare myself into thinking I'm actually involving myself in the process of creating something important
I like this line and I can relate to it.
fun to know you are hunkering down... fun to see what you have in the rafers. have a productive 'weekend'!

Thank you, Paula. I put up a little illustration for you. -AnitaNH